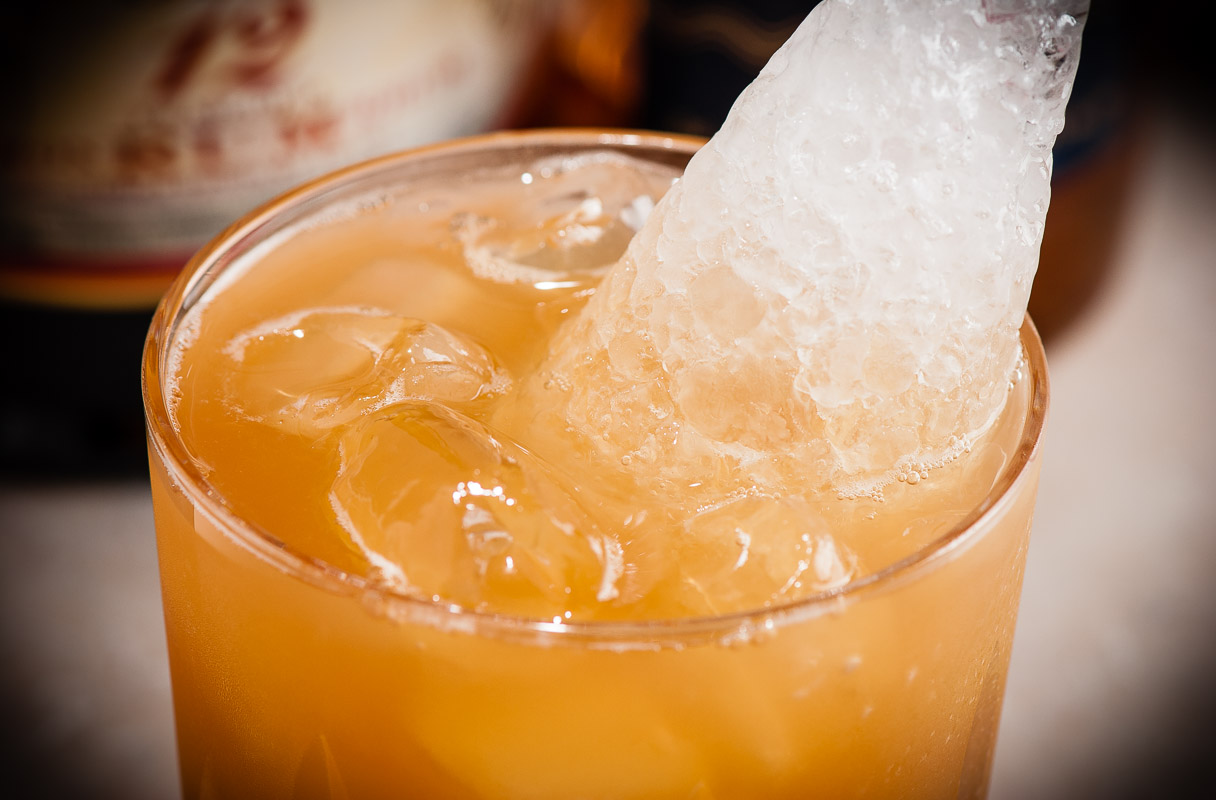 The original Navy Grog was specified by Admiral Edward Vernon while he commanded the British Navy’s West Indies fleet in 1740. Before that, sailors were issued their rum rations—a half-pint per day—straight from the barrel. Vernon wasn’t the first to notice that a midday cup of straight rum for every man on every ship had a poor effect on health, morale and efficiency, but he was the first to do something meaningful about it.

Vernon, known as “Old Grogram” to his crews (after the fabric of his boat cloak), ordered that sailors’ rum be served half in the morning, half in the afternoon, and diluted 4:1 with water. The water stored on sailing vessels went from fresh to foul in a fairly short time—that’s why sailors were drinking beer, wine, or rum in the first place—so using water to dilute rum solved two problems: the rum killed bacteria in the water, and the water turned what had been a straight pour into a long drink. Vernon also recommended that the mix should include sugar and lime to make it more palatable.

Rum, lime, water, sugar—the basic ingredients of Navy Grog are the building blocks of the classic punches, of the Daiquiri, and of a host of other Caribbean cocktails.

And, with a few additional flourishes, they are the elements of Beach’s 1941 creation, his Tiki classic Navy Grog.

The Beachcomber’s version is much the same drink as Vernon’s from two hundred years earlier, just dressed up a little. (Or a lot—I’ll come back to that astonishing ice cone and straw later…) Most of what we know about the drink comes from Jeff Berry’s research for Grog Log and Beachbum Berry Remixed (2010).

Navy Grog
(based on Donn Beach, via Jeff Berry)

Shake vigorously with ice cubes. Strain into a double old-fashioned glass with ice cone around straw.

As you might guess, specifying three very different types of rum leaves a lot of room for experimentation, and allows for a lot of flavor adjustments. I’ll describe a couple combinations I enjoy.

If you like your Grog Light and Smooth,  suitable for a hot summer afternoon, you might like a combination of Caliche silver Puerto Rican, Appleton Estate 12 year Jamaican, and El Dorado 12 Demerara. If you can’t find the Caliche, then Bacardi’s silver will do fine.

This combination is light and summery, and a little sweet. The richness of the Demerara is the dominant flavor, and the fruits blend nicely. The juice lightens the rums and the honey (which almost disappears); the lime and grapefruit combine elegantly into an amorphous, fresh “citrus” flavor.

If you Like your grog funky  and late-nightish, or if you just like big Jamaican rums, try Bacardi 8 for the Puerto Rican, the assertive Smith and Cross for the Jamaican, and stick with the El Dorado 12 for the Demerara. (Yes, I’m stuck on ED12. Other Demeraras would work well, I’m sure; it’s just that ED12 is my Bride’s favorite cocktail rum, so that’s that…)

This version is dominated by the Smith and Cross. The fruit is still there, and a sense of the sweetness, but this version is all dominated by Jamaican “hogo.” Either you like it, or you don’t. (I’d be interested to learn which Jamaican rum Beach used in the Beachcomber’s Navy Grog. Probably something that’s long gone from the marketplace…)

The business of mixing multiple rums is a classic characteristic of Tiki, and of Don the Beachcomber-style drinks. It’s particularly appropriate in the Navy Grog—the British Navy had its own private rum blend. The blend was apparently a state secret, but we know it was a mix of as many as five rums produced in the British Caribbean territories. Beach sensibly limited himself to three styles—the light and bright Puerto Rican, the sweet and rich Guyana Demerara, and the funky and dark Jamaican.

Honey Syrup:  According to Berry, the original version used three-quarters ounce of straight honey; I find it’s a lot easier to mix with 1:1 honey syrup. The original also called for three-quarters ounce of soda water, added after the mix was in the glass to put a little sparkle in the presentation; I cut that back to a “splash,” since there’s already the extra water from the honey syrup.

I’m not convinced you need to be too worried about how much water is in the mix—this drink is really very similar to a punch, with a large payload of rum, and plenty of ice to dilute it with time. In other words, when I make these, the “splash” of soda isn’t necessarily very small.

(If you prefer to use straight honey, you can just warm it up a bit to make it easier to mix.)

So what about that ice cone?  The most idiosyncratic thing about the Navy Grog is that goofy ice cone. Strictly over the top. I think it’s just pure, inexplicable whimsy. Navy Grog tastes fine without it, of course, but here’s how Berry describes its construction in Remixed:

“Pack a pilsner glass with finely shaved ice, run a chopstick through the middle to make a hole for the straw, and then gently remove cone from glass. Freeze cone overnight. When ready to serve, run straw through cone. Sip drink through straw.”

It takes a couple practice runs, but it’s pretty easy. And it doesn’t hurt to give the cone a little spritz of water before you put it into the freezer.

But wait, there’s more: In the “I-can’t-believe-they-actually-sell-these” category, Cocktail Kingdom markets a stainless steel mold for these ice cones, apparently in collaboration with Berry. I’m thinking that I haven’t paid anywhere near enough attention to Tiki in my life. It seems more amusing all the time.

And one more thing: if you enjoy Navy Grog, you might want to try Berry’s Ancient Mariner, his own spiced riff on this very old bit of seafaring history.