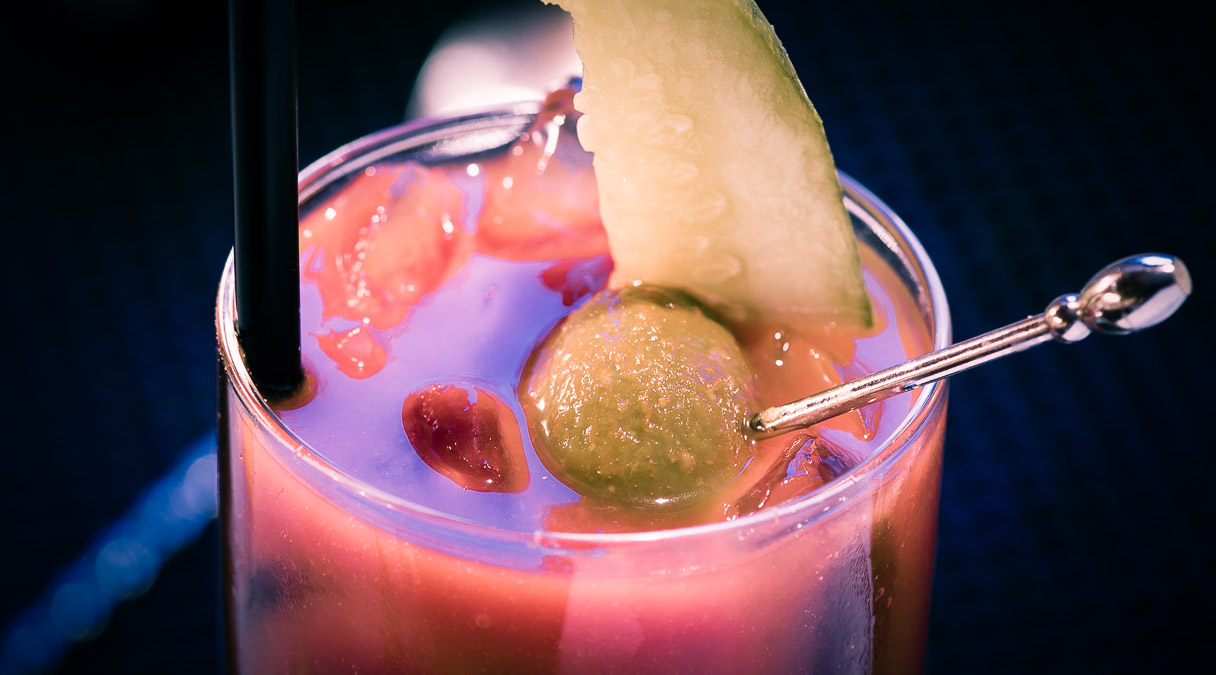 This always dismayed my mother, who loved tomatoes for breakfast, for lunch, for dinner, and for anytime in between. I always whined, and refused to eat them. Today it’s my tomato-loving bride who faces the pushback; I still whine and refuse to eat them.

The tomato-and-vodka Bloody Mary has been around since Prohibition, and its popularity seems never to have waned. I’m intrigued by the drink’s split personality—it’s one of the best-known of early twentieth century hangover cures, and at the same time one of the most popular of the modern “brunch cocktails”—sort of the tough guy of the Bellini-and-Mimosa set.

Historians tell us that tomato juice became fashionable as a bartender’s hangover cure in the early 1900s, and apparently was the base for many mixes alleged to ease the pains of overindulgence. The basic formula of tomato juice with various herbs, spices and peppery irritants (and, of course, a little “hair of the dog”) was probably widely accepted as a workable approach to surviving a difficult morning. Or evening, depending on how quickly you could get yourself moving.

The origin of the specific version we know as the “Bloody Mary” is obscure, of course, as is the origin of the name. The most widely-told story is about a bartender named Ferdinand “Pete” Petiot, who worked at Harry’s American Bar in Paris in the 1920s. Petiot claimed credit for being the first to mix vodka with tomato juice—and for naming the mix “Bloody Mary.”

Petiot’s story continues after Prohibition, when he moved to the US and became head bartender at New York’s St. Regis Hotel. It’s at this point, according to Petiot, that he started adding the spices that make the Bloody Mary what it is today.

But there were obstacles.

For starters, there was the name. Apparently, the St. Regis thought “Bloody Mary” unseemly, and changed the name to “Red Snapper.”

The other problem is that there was no vodka in the United States at the time. There had been plenty in Paris, thanks to expatriate Russians on the lam from the Bolsheviks, but the USA was still a vodka-free zone. And so, the Red Snapper was made with gin.

(I haven’t been able to figure out when the vodka-based Bloody Mary returned to the American scene, but it doesn’t seem to have taken long, perhaps the late 1930s or early 1940s, when the vodka tide began to rise.)

Cocktail origin stories are murky tales, and there’s usually no telling what’s true and what isn’t. The BarSmarts notes on the Bloody Mary stir the pot even more with this item:

“…in the late 1920s the people responsible for marketing [tomato juice] began widely publicizing an alcohol-free “Tomato Juice Cocktail” designed to give a bit of the bite of an alcoholic drink, without anything illegal in it. Its ingredients? Tomato juice, lemon juice, Worcestershire sauce, Tabasco sauce, salt and pepper.”

That’s not a bad description of the basic Bloody Mary mix. And, as BarSmarts snarks, “It didn’t take much inventing to add a little alcohol to that.”

That formula—tomato, Tabasco, Worcestershire, lemon, salt and pepper—describes the set of core ingredients that, along with vodka, are universally accepted as the basic Bloody Mary:

But then, hardly anyone makes the Bloody Mary “according to the recipe.” Every bar, restaurant and home brunch maker seems to have found a way to doctor that core recipe into what they consider the ultimate Bloody Mary.

And creativity isn’t limited just to the recipe—garnishes range from the classic celery or lime slice to utterly insane, Rococo monstrosities.

The modifications are endless. In the mood for pepper? Add more Tabasco, or substitute your favorite alternate hot sauce. Different juice? Use a mixed vegetable juice product like V8. Or spicy V8. Or how about Clamato juice, with some horseradish mixed in, and maybe some shrimp as garnish? Or maybe more herbs, perhaps oregano?

As for me, I like my Bloody Mary a bit salty, and not so much peppery as spicy, with a little ground celery seed and cumin added to deepen the flavor. Here’s the version that goes well at our house:

The Red Snapper is the same drink, but with a good London dry gin instead of the vodka. There is so much going on with herbs and spices in this mix that you can hardly tell the difference. The juniper does come through, but you have to look for it. It’s a great substitution, and adds that faint, extra herbal note if you’re in the mood for a slightly more complex flavor.
So why do I like the Bloody Mary? I still don’t know, but I’ve stopped asking. Maybe it’s just, as Charles Embury wrote, the Bloody Mary is “a classic example of combining in one potion both the poison and the antidote.”

That’s good enough for me.

“The Red Snapper and the Bloody Mary” at cold-glass.com : All text and photos © 2014 Douglas M. Ford. All rights reserved.

11 thoughts on “The Red Snapper and the Bloody Mary”