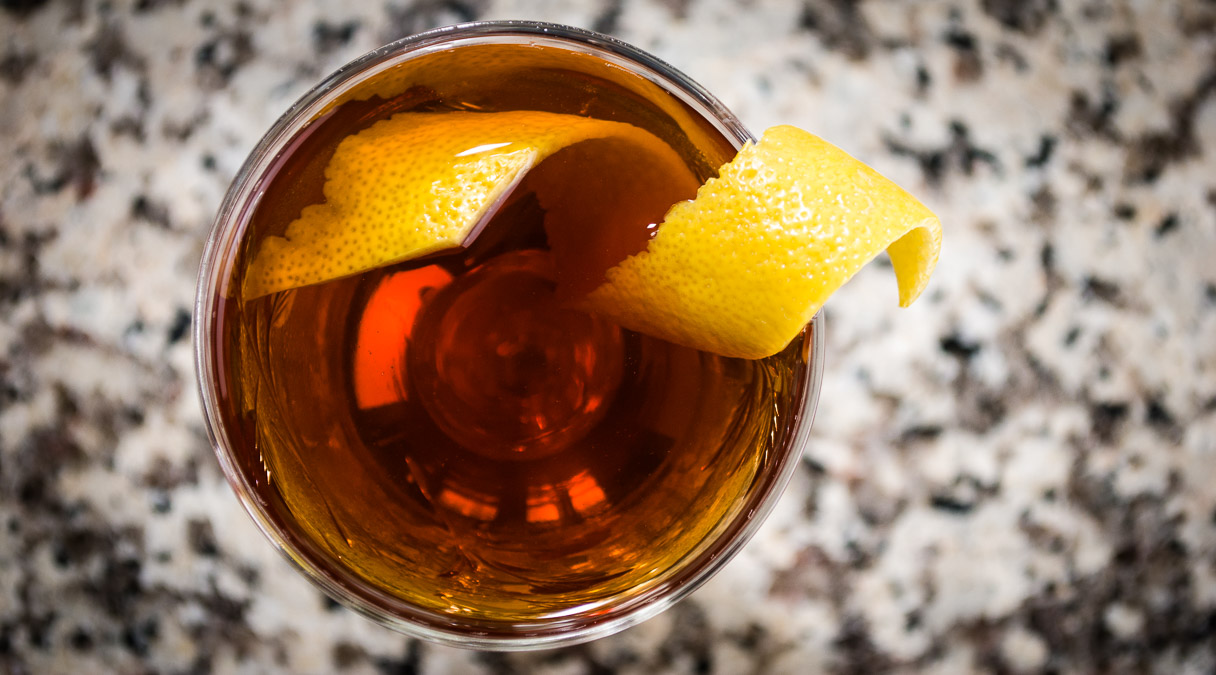 We have Gary Regan to thank for the modern Blackthorne Cocktail. The basic model of the drink has been around for something like a hundred years, but its original incarnation, as the Blackthorn (no final “e” in the old days), was a nondescript mishmash of flavors that didn’t hang together very well. When Robert Vermeire first published the recipe (Cocktails, How to Mix Them, 1922), he refered to it as “a very old cocktail,” and attributed it to New Orleans bartender Harry Johnson. His recipe called for equal parts of Irish whiskey and dry vermouth, plus dashes of bitters and absinthe.

Sometimes called the “Irish Blackthorn,” the original version is mildly repellent, not the sort of thing that makes me say, “Yes, I’ll just have another of those, please, and right away.” I think I’m not alone on that; Harry Craddock apparently found it interesting enough to “acquire” it into his Savoy Cocktail Book in 1930, but it’s pretty rare in cocktail manuals from the mid-20th century on. The industry pretty much kicked it to the side of the road and left it for dead.

It is part of Regan’s genius, I suppose, to recognize drinks that took a wrong turn somewhere, and to know how to rehabilitate them. I’d like to know why the Blackthorn caught his eye, but he must have seen a Manhattan in there somewhere. In the end, he made two changes that transform the uninteresting and marginal Blackthorn into the surprising and drinkable “Blackthorne.”

Here is my interpretation of his recipe from The Joy of Mixology (2003):

Stir whiskey, vermouth, and bitters with ice. Rinse a chilled cocktail glass with absinthe and pour off excess. Strain cocktail into the rinsed glass and garnish with lemon peel.

Regan’s palatable 2:1 proportions turn the drink back into a whiskey drink, and the sweet vermouth combines much more effectively with the Irish whiskey.

And not only does the recipe look a lot like a Manhattan, the drink itself actually tastes more like one than I expected. Maybe it’s just me, but I would swear the Blackthorne even smells like a bourbon drink.

At 2:1, the Blackthorne is still a little sweet; I’ve occasionally nudged the whiskey portion even higher, approaching 3:1. The “Irishness” of the whiskey comes through a bit more in that case. (And the less-sweet vermouths, like M&R, help to restrain that sense of sweetness, too.)

I’ve made this drink with various Irish whiskies, and they all made very drinkable Blackthornes.

And as Regan admonishes us, “the trick is…not to overpower the drink with too much absinthe…”

There are at least three main recipe families for the original Blackthorn Cocktail. In addition to the whiskey-based version, Vermeire also wrote up a sloe-gin recipe which seems to have some life among sweet cocktail lovers. It has, I suppose, the best claim to the Blackthorn name—sloe berries are the fruit of the blackthorn tree—but since the blackthorn tree is the traditional wood for Irish walking sticks (and shillelaghs), I’m willing to accept that connection for the whiskey version, too.

(If you enjoy the Blackthorne, there are more Scotch and Irish whiskey cocktails at Cold Glass.)

“The Blackthorne Cocktail” at cold-glass.com : All text and photos Copyright © 2012 Douglas M. Ford. All rights reserved.

One thought on “The Blackthorne Cocktail”