The Hart of Darkness 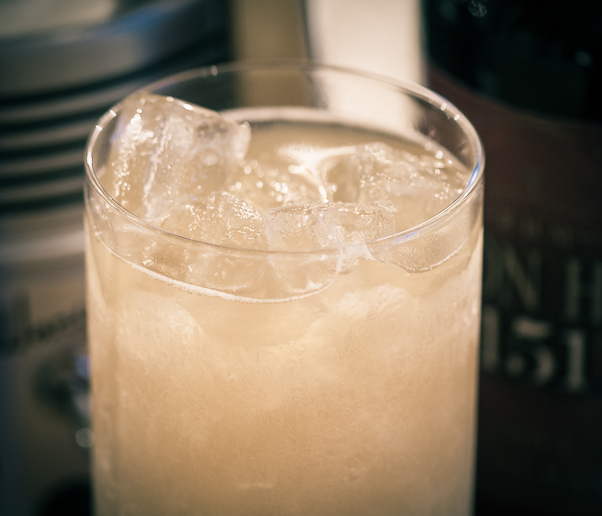 I was delighted to come across the Hart of Darkness cocktail in Jeff Berry’s Beachbum Berry Remixed (2010). Hart of Darkness is one of Berry’s originals, and its 21st century recipe fits nicely with his impressive compilation of mid-20th century tiki drinks.

I’ve never understood the attraction of the tiki experience, with the grotesque mugs, the overdone fruit-and-umbrella ornamentation, and the faux Polynesian trappings. But the drinks, well, that’s another thing altogether. Despite their often goofy names, labor-intensive preparation and over-the-top presentation, many tiki drinks are rum-filled wonders; the Hart of Darkness is no exception.

Two things about Berry’s recipe caught my eye: passion fruit syrup, which I’ve been keeping on hand ever since I learned the delights of the Hurricane; and Lemon Hart 151 demerara rum. Both elements are hat-tips to classic tiki tradition and the era of Trader Vic and Don the Beachcomber.

The drink’s backbone, Lemon Hart 151, is a high-alcohol, intensely flavorful mixing rum, with flavors of sugars and molasses, dried fruit, cinnamon and other spices I associate with first-rate apple pies. Maybe a little burned sugar, or even smoke. Until Hart of Darkness appeared, 151’s main use at my house was as a float on drinks like the Mai Tai, or as a contributor to cocktails like the Atlas; this is the first drink I’ve encountered where it is the centerpiece spirit.

Put everything in a blender. Blend at high speed for 5 (10) seconds. Pour into a tall glass. Add ice cubes to fill.

For starters, I’m impressed that Berry updated this drink’s presentation, calling for a “tall glass” instead of some sort of tiki mug. It’s also streamlined—no garnish anywhere in sight.

I can’t figure out what the quarter-ounce of soda water is about. There isn’t enough of it to offset the acidity of the fruit, and a quarter ounce of soda or any other kind of water makes no noticeable difference in the way everything blends (and soda’s fizz certainly doesn’t survive either shaking or blending). It remains a mystery.

On the other hand, nor could I figure out why Berry put the whole thing through the blender—and this time I found a bit of enlightenment. I’m not much of a blender drinks person, and this looked like just so much hokum. But this drink has everything else going for it, and I could hardly write about it without at least once making it according to the rules, so I gave it the full treatment. Once. Then twice. Now, maybe Berry’s blender is spiffier than mine, but the prescribed 5 second blend didn’t seem to change much about the drink. I couldn’t just let that rest, so on the second try, I gave it a long ten seconds, poured the drink, and then I understood: if the ice is fine enough, and the blend is thorough enough, Hart of Darkness will quickly put a most excellent frost on your glass, much as you would get from a swizzle. It’s a small point, and optional, I suppose, but it makes a delightful presentation.

(And you don’t need to use crushed ice, either—the drink tastes just fine if you shake it with normal ice, omit the blender, and just pour the whole mix, unstrained, into your serving glass. No frost, but a great drink.)

Not optional is the Lemon Hart 151. The name itself makes it clear that this is a showpiece for Lemon Hart 151, and there are no substitutes. That overproof rum was a favorite of the tiki era, and appears to be the only remaining high-proof demerara rum. You could, I suppose, substitute Lemon Hart’s 80-proof product and still at least follow the naming convention, but it wouldn’t have the same deep and aggressive flavors that the 151 provides—a sort of “Hart of Twilight” or something…

Berry adds an amusing commentary on the Hart of Darkness:

“Lemon Hart’s 151 Demerara is our favorite rum. There’s just one problem: you can’t drink much of it without blacking out and waking up the next day in a country where no one can speak your language, but everyone seems very disappointed in you for some reason. So in 2005 we fashioned this drink to keep us from sipping the stuff neat.”

“The Hart of Darkness” at cold-glass.com : All text and photos Copyright © 2012 Douglas M. Ford. All rights reserved.

I am a journalist and photographer. Once upon a time I had a corporate job; now I don't, which is a pretty happy situation, all in all. People tell me I'm writing a book.

2 thoughts on “The Hart of Darkness”